Ocean circulation and biochemistry support rich biological diversity in the waters along the US West Coast, across the entire Exclusive Economic Zone within the 200 nautical miles from shore. Pacific waters along the US West Coast span three states and serve a variety of economic needs and societal benefits. For example, it is an area of intense shipping, and west coast marine fisheries contribute meaningfully to the economy of many local communities. Ocean forecast systems are using comprehensive, three-dimensional ocean circulation models, often coupled to biological/chemical models to estimate ocean physical and biogeochemical conditions. These models are combined with atmospheric forecasts and assimilate satellite and in-situ observations to provide guidance to fishermen and other users. The forecast products, available for several days in advance, provide multiple benefits to businesses, government agencies, and the general public.

For instance, knowledge of surface currents and temperature

- will help fisheries management and planning

- provides guidance to search and rescue operations at sea

The US West Coast component of the Coastal Ocean Modeling Testbed brings together researchers involved in coastal ocean modeling, data assimilation, and prediction with the goal of improving existing prediction systems and comparing performance of different models and data assimilation approaches. The existing real-time forecast systems, supported by NOAA IOOS regional observing systems, include (1) the Oregon-Washington system run by a group at Oregon State University as part of NANOOS, (2) the LiveOcean system focused on the Washington coast and run at the University of Washington, supported by NANOOS and the State of WA, (3) the California system run by RSSI supported by CeNCOOS and SCCOOS, and (4) the regional West Coast system run at the University of California – Santa Cruz, supported by CeNCOOS. These efforts include different approaches to data assimilation and different biogeochemical models.

The metrics for skill assessment and the best practices for data assimilation and coupled physical-biogeochemical modeling are transitioned to the West Coast Ocean Forecast System that is being developed and tested at NOAA CSDL and implemented in the near real-time by NOAA CO-OPS.

The Oregon-Washington (OR-WA) coastal ocean data assimilation and forecast system is run operationally at the College of Earth, Ocenic and Atmospheric Sciences, Oregon State University. It provides daily updates of 3-day forecasts of oceanic currents, temperature, salinity and total sea level. The system operation is part of the NANOOS Regional Association activities and forecasts are delivered to the public at http://nvs.nanoos.org. The model resolution is 2-km in horizontal. The domain extends in the alongshore direction from 40.5 to 50N. The model dynamics are based on the Regional Ocean Modeling System (ROMS, myroms.org). The initial conditions for the forecasts are constrained by assimilation of alongtrack altimetry, satellite SST, and HF radar surface currents. Data assimilation uses the 4DVAR method in a series of 3-day windows. To enable 4DVAR, the nonlinear ROMS is integrated with the AVRORA tangent linear and adjoint system (Kurapov et al., JGR, 2011).

Over the years, S. Erofeeva, P. Yu, I. Pasmans and A. Kurapov have contributed to the OR-WA system development.

The OR-WA data assimilation system has been used as the test ground for new developments and skill assessments:

Pasmans, I., A. L. Kurapov, J. A. Barth, A. Ignatov, P. M. Kosro, and R. K. Shearman, 2018: Why gliders appreciate a good company: glider assimilation in a 4DVAR system with and without surface observations. J. Geophys. Res., submitted.

LiveOcean is a daily forecast model of ocean circulation and biogeochemistry for the NE Pacific and Salish Sea developed by the University of Washington Coastal Modeling Group: http://faculty.washington.edu/pmacc/cmg/cmg.html. The model http://faculty.washington.edu/pmacc/LO/LiveOcean.html creates a three-day forecast every day for the region shown in Fig. 1. The model domain covers 43 to 50 N and -127.4 to -122 W. The LiveOcean output database contains continuous hourly fields starting January 1, 2013 and going to the present. Recent fields, including biogeochemical properties on multiple levels, are available publicly through the NANOOS NVS website http://nvs.nanoos.org/Explorer?action=overlay:liveocean_temp and the IOOS EDS Model Viewer https://eds.ioos.us/.

The modeling framework employs the Regional Ocean Modeling System (ROMS http://myroms.org/) a free surface, hydrostatic, primitive equation model. The model is forced with realistic atmospheric, tide, river, and ocean boundary conditions to simulate the 3D circulation and water properties throughout the domain. The model includes 16 river point sources using daily measured and forecast discharge including 14 Puget Sound rivers, the Fraser River, and the Columbia River. Eight tidal constituents derived from the 1/4° TPXO7.2 inverse global tidal model are forced at the open boundaries. Meteorological forcing of surface pressure, wind, air temperature, relative humidity, shortwave radiation, downward longwave radiation, and rainfall are taken from a WRF regional forecast model with 12 km resolution run by Dr. Cliff Mass at University of Washington. Open ocean boundary conditions for daily-averaged velocity, salinity, temperature and sea surface height come from the HYCOM global model (http://hycom.org/). The river, atmosphere and ocean forcing models are data-assimilative and so do an excellent job of keeping their forecast fields close to observations. The grid horizontal resolution is 1.5 km on the shelf, and 4.5 km far offshore. There are 40 vertical levels, distributed from the sea floor to the sea surface, giving excellent resolution of both bottom and near-surface processes. The large domain allows important interactions between the inland and coastal waters, for example the influence of coastal upwelling and the Columbia River plume on the inflow to the Strait of Juan de Fuca, which in turn sets many of the water properties in Puget Sound.

This model was developed in the recent NOAA-funded PNWTOX project (Dr. Barbara Hickey, PI) to study Pseudo-nitzschia harmful algal blooms (HABs). Hindcast experiments from 2004-2007 were extensively validated in terms of currents, temperature, salinity, sea surface height, and biogeochemistry (Giddings et al. 2014; Davis et al. 2014; Siedlecki et al. 2015). The model exhibited significant skill in all regions on the shelf. Most recently it has been used in a study of the Strait of Juan de Fuca (Giddings and MacCready 2017) where it was successfully able to reproduce the flow reversals there which are caused by downwelling-favorable winds and the Columbia River plume. Over the past three years, with funding from the Washington Ocean Acidification Center, the model framework was transitioned from being a hindcast model to its current version as a daily forecast model. The model is currently used as part of the NOAA MERHAB-PNW project to provide early warning of the arrival of HABs at the Washington coast. 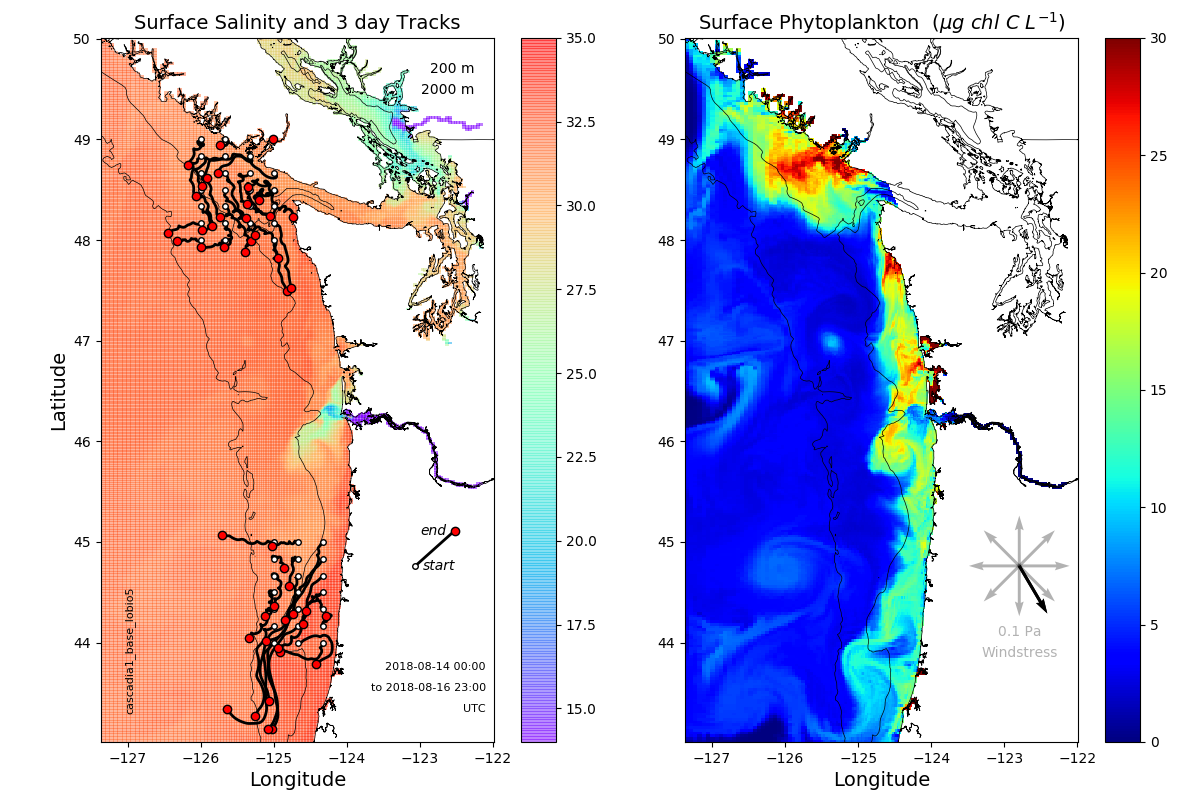 Figure 1. LiveOcean model surface salinity (left) and phytoplankton fields (right) from the end of a 3-day forecast from August 2018. On the left panel are 3-day tracks of numerical particles released at known hotspots for HAB initiation. The creation of particle tracking movies is an automated part of the LiveOcean system.

The California Current System Regional Physical Model was developed at UC Santa Cruz (Veneziani et al. 2009a). The ocean circulation is modeled using the Regional Ocean Modeling System (ROMS). Our domain extends from midway down the Baja Peninsula to 48 N, near the southern tip of Vancouver Island, at 1/10 degree (roughly 10 km) resolution, with 42 terrain-following levels resolving vertical structure in ocean properties. The model is forced at the surface by atmospheric fields produced by the Coupled Ocean Atmosphere Mesoscale Prediction System (COAMPS) which is run in near-real-time by the Naval Research Laboratory. Oceanic fields at the lateral boundaries are obtained from a larger, basin-scale data assimilative model, HYCOM. The model does not include freshwater forcing by rivers, and it neglects tidal motion.

The UCSC ocean data assimilation methodology uses the ROMS 4-Dimensional Variational assimilation system (Moore et al., 2011). Satellite-derived sea surface height, sea surface temperature, and sea surface salinity are assimilated when available, along with in-situ hydrography from a variety of sources (e.g., shipboard casts, gliders, and Argo profiles). Sequences of 8-day analyses of the California Current System from 1980 to 2010 and 1999 to 2011 have been calculated, and a near real-time product has been running fairly routinely from 2011 to the present. A near real-time, coupled physical biogeochemical model has also been running since 2014, using 4-day cycles and assimilating satellite-derived chlorophyll estimates.

Considerably more information about the model and its output can be found at http://oceanmodeling.ucsc.edu.

The US West Coast Ocean (Operational) Forecast System (WCOFS) is the transition project for the West Coast COMT component. WCOFS is being developed by NOAA CSDL (principal developer A. Kurapov) and prepared for real-time implementation at NOAA COOPS. The model horizontal resolution is 2-km and the model extent in the alongshore direction is 24-54N. Point of contact: Alexander Kurapov

Three NPZ-type, lower trophic level, biogeochemical models were evaluated and compared as part of this project. (1) The Cascadia model is a six-component model including nutrients, phytoplankton, microzooplankton, slow- and fast-sinking detritus, and oxygen. It has been developed and parameterized specifically for Washington-Oregon coastal waters, and is run in near real-time at the University of Washington. (2) The UCSC version of NEMURO (derived from Kishi et al. 2007) includes eleven state variables: nitrate, ammonium, small and large phytoplankton biomass, small, large and predatory zooplankton biomass, particulate and dissolved organic nitrogen, particulate silica, and silicic acid concentration. NEMURO has been used for years in the regional domain and is run at UCSC in near real-time with data assimilation in support of CeNCOOS. (3) The CoSiNE model (Chai et al., 2002) is a 9-component model, representing the evolution of two phytoplankton groups, two size classes of zooplankton, two types of detritus, ammonium, nitrate, and silicate. It has been widely applied to a variety of regions including the tropical Pacific ocean and California current system.

For the biogeochemical comparison, a 1-year integration was carried out for the year 2000. Model fields were evaluated by calculating model data misfit to instantaneous surface chlorophyll data from the SeaWiFS platform and deviations from climatological nutrients after spatially and temporally averaging model output over three-month, 1-degree square regions. Models were evaluated both using base parameters tuned for alternate applications and parameters optimized for this physical implementation resulting from a Monte Carlo tuning procedure (Mattern and Edwards, 2017). Overall, all three models performed well in the UCSC domain with good agreement with data. Phytoplankton growth rates and zooplankton grazing rates for each model spanned ranges for these rate processes calculated in along the Oregon and Washington coasts (Banas et al., 2008). Cascadia was the most computationally efficient model with the fewest state variables. The model having lowest cost function (least model-data misfit) was the most complex model investigated, NEMURO.

Based on results of the multi-model evaluation in the regional CCS domain, the NEMURO model was ported to the 4 km WCOFS domain and integrated as a test-case from October 1, 2012, to December 31, 2013. Model output was evaluated against satellite-derived surface chlorophyll and climatological nitrate and silicate over the spring/summer period of 2013. The model performs well, revealing good quantifiable agreement with observations in terms of mean quantities and temporal evolution. Model results from this experiment, along with all necessary forcing files, are posted here as a baseline against which future results can be compared and improvements established.