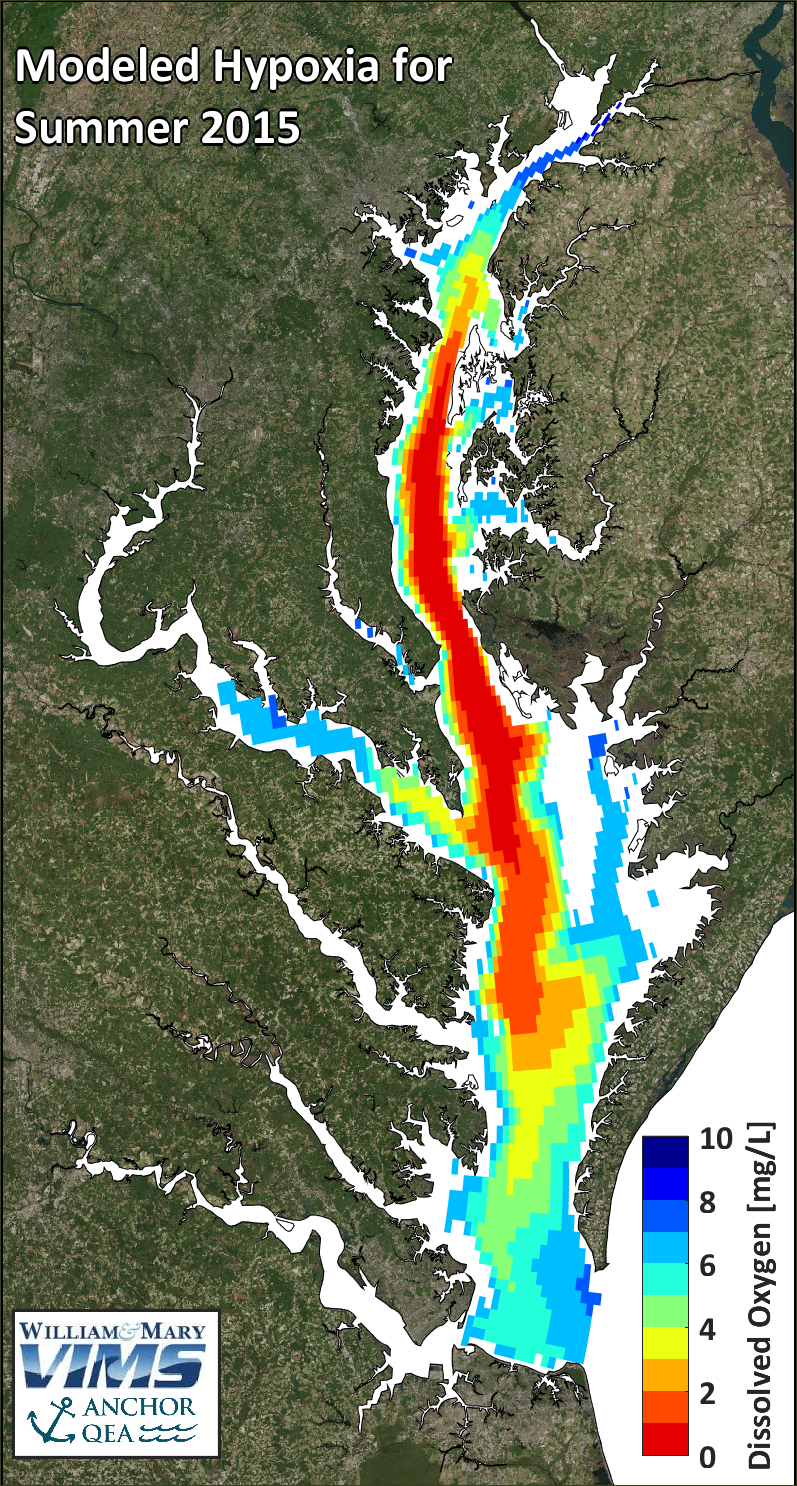 Hypoxia is a condition threatening the health of the Chesapeake Bay in which oxygen levels drop so low that fish and other animals are stressed or killed. In the Bay, incidents of hypoxia-causing ‘dead zones’ are on the rise.

Hypoxia in Chesapeake Bay usually occurs in the summer and is primarily the result of human activities that deliver nutrients such as nitrogen and phosphorus into the Bay, although evidence from the testbed scientists suggest that wind forcing also plays a significant role. The added nutrients support surface blooms of algae, which eventually die, sink and are decomposed at the bottom of the Bay by oxygen-depleting bacteria. The resulting hypoxia can suffocate animals that cannot move away, such as shellfish, and — depending on how quickly the hypoxia develops — either kill or force into less suitable habitat free-swimming animals such as fish and crabs.

The Chesapeake Bay Testbed project is designed to provide a better understanding of the uncertainty inherent in predictions of properties such as salinity, temperature, chlorophyll, and nutrients; how this uncertainty contributes to the predictability of dissolved oxygen concentrations; and how to improve models of dissolved oxygen (DO) concentration in the Chesapeake Bay. Model intercomparisons have demonstrated that the regulatory model used by the EPA Chesapeake Bay Program performs as well as many of the research models currently being used by the scientific community, giving both Chesapeake Bay Program Managers and academic scientists more confidence in the regulatory model. An ensemble mean of multiple models was found to have higher skill predicting hypoxia than any individual model (Irby et al., 2016), illustrating the potential value of multi-model ensembles for decision making in the Chesapeake Bay.

A simple one-term model for hypoxia was developed for use in operational forecasts and is currently providing nowcasts and 2-day forecasts of Chesapeake Bay hypoxia on the Virginia Institute of Marine Science website. Forecasts from more sophisticated hypoxia models are in the developmental stage and will soon also be available on this website, along with other fields relevant to Chesapeake stakeholders (temperature, salinity, chlorophyll, water clarity). Efforts to transition this tool to NOAA’s Chesapeake Bay Operational Forecast System (CBOFS) and to the IOOS Mid-Atlantic Regional Association (MARACOOS) OceansMap are ongoing. In a companion effort, the Chesapeake Hypoxia Testbed team has used multiple models to examine how nutrient load reductions will impact dissolved oxygen in the Chesapeake Bay, and has developed a method for quantifying the uncertainty associated with projected changes in hypoxia resulting from the implementation of these nutrient reductions. Ongoing work is focused on applying projected changes in temperature, freshwater flow, and sea level rise for a 2050 scenario to explore the impact climate change may have on future Chesapeake Bay hypoxia and the potential success of the nutrient reductions in attaining mandated estuarine water quality standards.

The results of this project are providing the modeling information that will enable best management practices and mitigation measures to be targeted on the human activities that have the most significant effect on decreasing nutrient transfer from land to coastal ecosystems in the region. Recent findings include (1) that the ChesROMS-1term model performs just as well when using nowcast forcing as it does when using hindcast forcing, (2) that ignoring precipitation/evaporation and underestimating riverine freshwater inputs may be causing a high salinity bias in the official version of CBOFS, (3) that nutrient load reduction scenarios conducted with both the regulatory EPA model and our ChesROMS-BGC research model confirm that both models predict similar improvements in bottom DO, and nearly identical water quality standards attainment, (4) the transition of the HYPOXIA_SRM (simple respiration model) to the official ROMS Ecosystem Branch. Additional detail on the methodology and results of this project are available from the 2016 COMT Annual Meeting Report and the 2016 Semi-Annual Report. 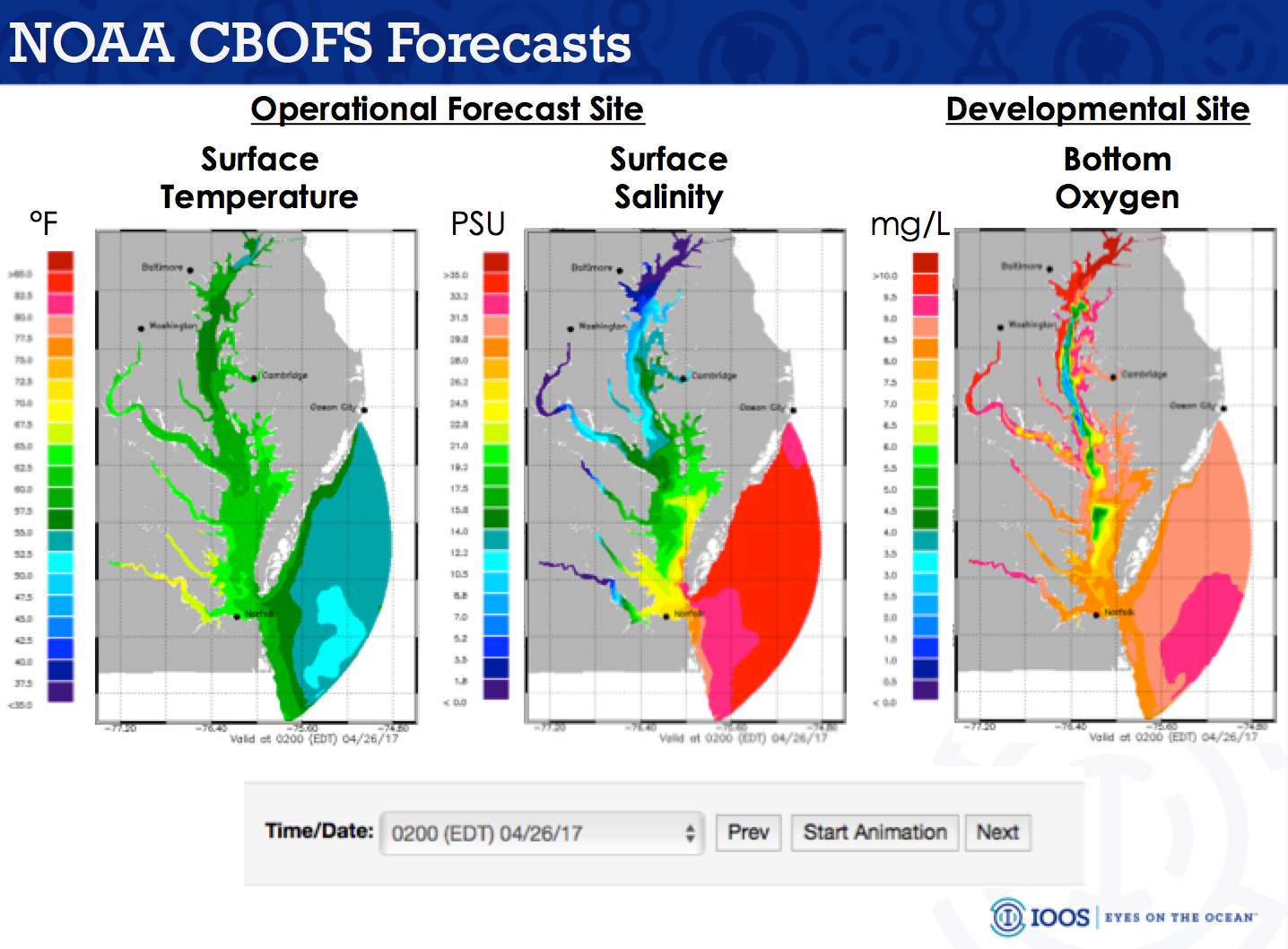 ChesROMS (Xu et al. 2012) is a community ocean modeling system for the Chesapeake Bay region, which is based on the Regional Ocean Modeling System (ROMS), with significant adaptations for the Chesapeake Bay. The model uses a curvilinear horizontal grid and a stretched terrain-following vertical grid with twenty vertical layers. The model was developed to provide a community modeling system for hindcasts, nowcasts and forecasts of 3D hydrodynamic circulation, temperature and salinity.

Multiple ecosystem/biogeochemical models have been coupled with ChesROMS. These include the Simple Respiration Model (SRM) which uses a constant respiration rate throughout the water column, as well as more sophisticated biogeochemical including including ChesROMS-ECB and ChesROMS-BGC (see Irby et al. 2016 for descriptions of these models.)

The ROMS-based Chesapeake Bay Operational Forecast System (CBOFS; Lanerolle et al., 2011) is the operational model run by the NOAA National Ocean Service. A major difference between ChesROMS and CBOFS is the horizontal grid resolution; ChesROMS has 100x150 cells with about 1 to 7 km resolution; CBOFS has 332x291 cells with about 0.03 to 4 km resolution. Results from CBOFS are available at: https://tidesandcurrents.noaa.gov/ofs/cbofs/cbofs.html. The Simple Respiration Model (SRM) has recently been coupled with CBOFS; these results are only available on a developmental version of the official CBOFS website.

Another ROMS-based model for the Chesapeake Bay has been independently developed and coupled to the Row-Column AESOP model (RCA; Testa et al., 2014). This version of ROMS (Li et al. 2005) is very similar to ChesROMS (including a similar horizontal resolution and number of vertical grid levels), but has slightly different hydrodynamic parameterizations and physical forcing.

The Curvilinear Hydrodynamics in Three Dimensions model (CH3D; Cerco et al., 2010), is compared with the ChesROMS models described above in Irby et al. (2016). This model employs a z-grid and is used by the EPA Chesapeake Bay Program as part of their regulatory operational modeling framework. The horizontal grid of CH3D-ICM has significantly greater resolution than ChesROMS, and is more equivalent to that of CBOFS. CH3D is coupled to the Integrated Compartment Model (ICM), which is a complex biogeochemical modeling system.

The ChesROMS models were also compared with the Finite-Volume Community Ocean Model (FVCOM; Jiang and Xia, 2015). FVCOM employs an unstructured grid with ten vertical layers. Like CH3D, FVCOM is coupled to the ICM.

Description: Although measurement of in-situ dissolved oxygen (DO) is straightforward with modern instrumentation, quantifying the volume of water in a given embayment that is hypoxic (hypoxic volume, HV) is a more difficult task; however, this information is critical for determining whether management efforts to increase DO are having an overall impact. This paper uses output from a three-dimensional numerical model to demonstrate that HV in Chesapeake Bay can be estimated well with as few as two vertical profiles. In addition, the cumulative hypoxic volume (HVC), i.e. the total amount of hypoxia in a given year, can be calculated with relatively low uncertainty (<10%) if continuous DO data are available from two strategically positioned vertical profiles. This is because HV in the Chesapeake Bay is strongly constrained by the geometry of the embayment. A simple Geometric HV calculation method is presented, and numerical model results are used to illustrate that for calculating HVC, the results using two daily-averaged profiles are typically more accurate than those of the standard method that interpolates bimonthly cruise data. Bimonthly data produce less accurate estimates of HVC because high frequency changes in oxygen concentration, for example due to regional-weather or storm-induced changes in wind direction and magnitude, are not resolved. The advantages of using continuous vertical profile data to estimate HVC should be applicable to other systems where hypoxic water is constrained to a specific area by bathymetry. The datasets below include the station file output from the Regional Ocean Modeling System Simple Respiration Model (ROMS-SRM) used in the analysis, as well as a MATLAB .mat file of the 3-D HV from the average files.

Description: A comparison of eight hydrodynamic-oxygen models revealed that while models have difficulty resolving key drivers of dissolved oxygen (DO) variability, all models exhibit skill in reproducing the variability of DO itself. Further, simple oxygen models and complex biogeochemical models reproduced observed DO variability similarly well. Future advances in hypoxia simulations will depend more on the ability to reproduce the depth of the mixed layer than the degree of the vertical density gradient.

A 30-year simulation with a simple hypoxia model that employs a constant respiration rate was conducted to examine the role that physical forcing plays in inter-annual variations in hypoxic volume in Chesapeake Bay. Despite the simplicity of the approach, the model demonstrates skill in simulating the observed inter-annual variability of hypoxic volume capturing 50% of the observed variability in hypoxic volume (< 2 mg/L) for the month of July and 58% of the observed variability for the month of August, over the 30-year period. Model skill increases throughout the summer suggesting that physical processes play a more important role in modulating hypoxia later in the summer. Model skill is better for hypoxic volumes than for anoxic volumes. In fact, a simple regression based on the integrated January—June Susquehanna River nitrogen load can explain more of the variability in the observed anoxic volumes than the 1-term model. Model results suggest that the mean summer (June-August) wind speed is the single-most important physical variable contributing to variations in hypoxic volumes.

Scully, M.E., 2016. The contribution of physical processes to inter-annual variations of hypoxia in Chesapeake Bay: A 30-year modeling study. Submitted to Limnology and Oceanography, doi:10.1002/lno.10372.

Scully, M.E., 2016. The contribution of physical processes to inter-annual variations of hypoxia in Chesapeake Bay: A 30-year modeling study. Submitted to Limnology and Oceanography, doi:10.1002/lno.10372.

The simple SRM model has been expanded to more realistically account for the production of dissolved oxygen by gross primary production (GPP). The model employs analytical expressions that allow the parameters of the photosynthesis-irradiance (PE) curve to vary both in time and space in a manner consistent with observations from Chesapeake Bay. The model was applied to simulate 2013 and demonstrates skill at simulating both surface and near bottom dissolved oxygen concentration. A new methods for estimating GPP from diel variations in oxygen concentration was developed and tested using the output from this model. The method was then applied to 7-years of continuous data collected through the Chesapeake Bay Interpretive Buoy System (CBIBS).

Scully, M.E., 2018b. A Diel Method of Estimating Gross Primary Production Part 2: Application to 7 years of Near Surface Dissolved Oxygen Data in Chesapeake Bay, in review, Journal of Geophysical Research.

Description: The Chesapeake Bay plays an important role in transforming riverine nutrients before they are exported to the adjacent continental shelf. Although the mean nitrogen budget of the Chesapeake Bay has been previously estimated from observations, uncertainties associated with interannually varying hydrological conditions remain. In this study, a land-estuarine-ocean biogeochemical modeling system is developed to quantify Chesapeake riverine nitrogen inputs, within-estuary nitrogen transformation processes and the ultimate export of nitrogen to the coastal ocean. Model skill was evaluated using extensive in situ and satellite-derived data, and a simulation using environmental conditions for 2001–2005 was conducted to quantify the Chesapeake Bay nitrogen budget. The five year simulation was characterized by large riverine inputs of nitrogen split roughly 60:40 between inorganic:organic components. Much of this was denitrified and buried within the estuarine system. A positive net annual ecosystemproduction for the bay further contributed to a large advective export of organic nitrogen to the shelf and negligible inorganic nitrogen export. Interannual variability was strong, particularly for the riverine nitrogen fluxes. In years with higher than average riverine nitrogen inputs, most of this excess nitrogen (50–60%) was exported from the bay as organic nitrogen, with the remaining split between burial, denitrification, and inorganic export to the coastal ocean. In comparison to previous simulations using generic shelf biogeochemical model formulations inside the estuary, the estuarine biogeochemical model described here produced more realistic and significantly greater exports of organic nitrogen and lower exports of inorganic nitrogen to the shelf.